Crew, all three rather sleepy, are suddenly with it.  “Whathappenedwhatwasthat????  Skipper, now also wide awake, with the stop handle and about half a meter of cable in his hand, swore in both available languages.  “Hope it was something in the prop”.  Four heads over the rail. Calm water. No sign of rope ends or other nasties. 200 meters from the berth. Up with a bit of sail. Slow drift into berth.  Tie up. Then the customary (Norwegian) anchor dram.

We had just finished well in the Ballad class in the 65 nm. Færder Regatta, June 2001, starting from the inner Oslo harbour, then out the Oslo fjord to the Hollender mark and half way back and were looking forward to some food and sleep, not trauma.

Motor, now just outside the extended guarantee, repaired by the VP agent who had installed it in 1996. New head complete. One new piston and pin. All cylinders honed. New rings. New big-end shells. (NOK 25 000)

The Volvo Penta MD 2020 B is an 18 HP, 3 cylinder diesel, 0,68 L. swept volume. When healthy it starts easily, runs very smoothly and quietly and is very economical, about 1,1 litres per hour at 5 to 6 knots cruising speed. A suitable replacement for MD 6 or MD 7.

In 2003, we heard of a sad tale from the Swedish Ballad Club of a very similar incident, this time with the conclusion that the prime cause was corrosion from sea water.

So, we rushed to re-investigate the damaged bits, which had luckily not been binned.

Photo 1 is of the valves of cylinders 2 and 3, after wire brush cleaning. No. 3 exhaust (aft) to the left. No doubt about it, all are corroded, with the aft-most the worst. The piece missing from no. 3 exhaust is what caused the damage to the head and piston.

The Question, and a description of the installation.

So, what was allowing sea water to get into the engine?

After much one-sided correspondence with Volvo Penta Norway, (no use trying the local company who had installed the engine and repaired it, as it had exasperatingly gone broke in the interim), I received a copy of VP’s installation recommendations, specifically relating to water circulation and exhaust configuration.

My installation did not comply.

Photo 2 shows the installation, with the exhaust water-lock (under the trouser leg) to the left and over a meter away from the engine, and higher than the exhaust manifold outlet, just visible to the right. (Waterline is about 2 cm above the line of screws visible in the plywood wall in the background). The hoses to and from the anti-siphon valve, mounted correctly high enough up, partially hide the exhaust hose. Rest of the exhaust, from the water-lock, is (also) 45 mm inside diameter hose to a loop up under the afterdeck and out vertically downward just above the waterline.

The explanation? and new evidence.

What was probably happening was that much water was left in the long hammock of exhaust hose after the engine was stopped. Subsequent motion under sail allowed this water to slosh back and forth and run into particularly the aft cylinder. Corrosion was inevitable.

Alarm bells rang, and the head was removed for inspection.  (Three seasons and about 450 running hours since the repair).

Photo 3 is of the no. 3 cylinder, with severe corrosion of the exhaust valve, (condition as dismantled), and less to the others. Oh dear!  Almost another disaster. What to do?

Compared to the original VP MD 7, a slower-running, two cylinder, uneven firing engine, the new MD 2020, with its three, even-firing cylinders, blows much less exhaust more evenly. Not so good at spitting water therefore. I also have a suspicion that the seawater pump on the MD 2020, which according to the VP spares list, is common with larger engines in the same series, may well pump more water than is strictly necessary. (Experiments with a smaller cam in the pump will be carried out later).

Photo 4 shows the new water-lock in a new position inside the engine cowl, in its lowest possible position. Outlet as per original set-up. The water-lock conflicts with, and prevents access to, the prop-shaft seal. (Old one in this picture).

Photo 5 shows the new water-lock mounted in its final position, slightly to port, in a cut-out and fibre-glassed recess in the engine cradle.

Photo 6 shows the water-lock in its final home, with new outlet through a new hole in the cradle aft wall. Almost all the volume of the water-lock is now below the engine exhaust outlet. A short outlet hose connects onto a stainless steel pipe of 32 mm inside diameter. This pipe leads aft to a short hose connecting it with the Vetus swan-neck, type LT 40, see photo 7, mounted close into the transom and, with its outlet bend cut short, exhausting into the original exhaust skin fitting.

The gear control cable had to be re-routed to avoid the water-lock, but now has a much better run and is much smoother in operation.

Also visible in photo 6 is the new propshaft seal, from PSS, an axial seal, carbon against polished stainless steel. The transparent hose is to bleed the air out of the seal at launch time. Necessary.

The corrugated hose in photo 7 is the bilgepump outlet. This is not a satisfactory permanent solution as this type of hose, when bent sharply or trodden on (yes it has happened!), splits open. Bad news, wet feet.

Everything is now back and working, the boat is now afloat and short engine trials have been carried out.

For water in the exhaust, following normal shut down:

Detach the exhaust hose at the engine exhaust manifold end, and see if any water runs out.

Arrange a bypass in the seawater circulation which opens automatically at engine idle, thereby reducing the amount of water pumped into the exhaust at idle, but closing automatically on increased revs and therefore load.  Alternatively a bypass with a cock in it, to do the same, but then it would have to be remembered to be operated!

A question for other sailboat owners.

The previous engine also died through corrosion, through an exhaust port wall in that case. 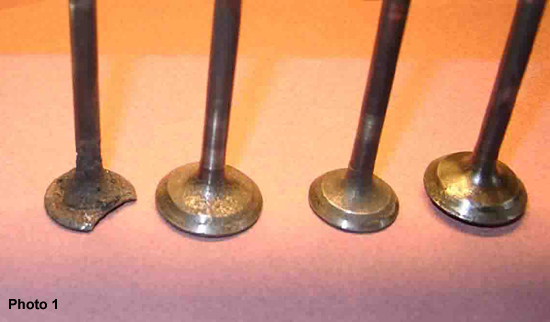 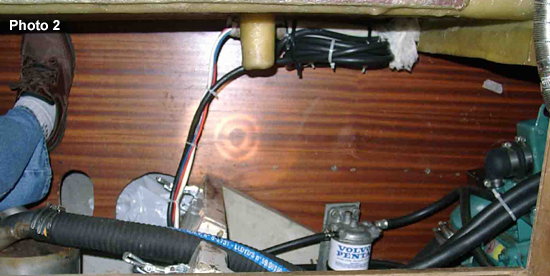 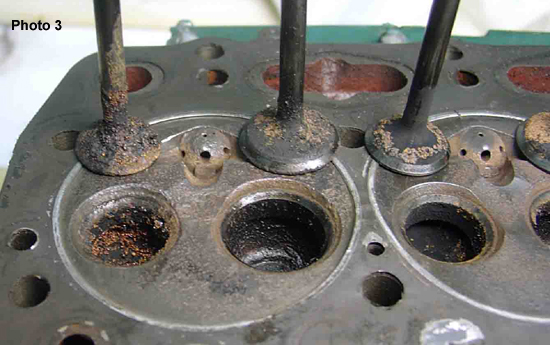 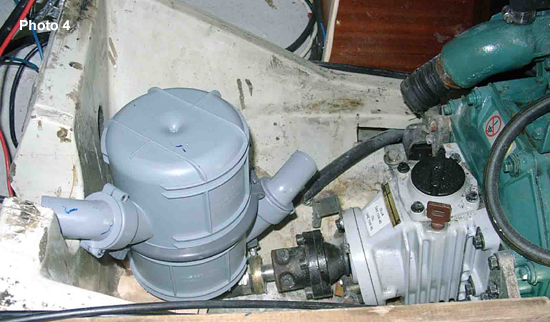 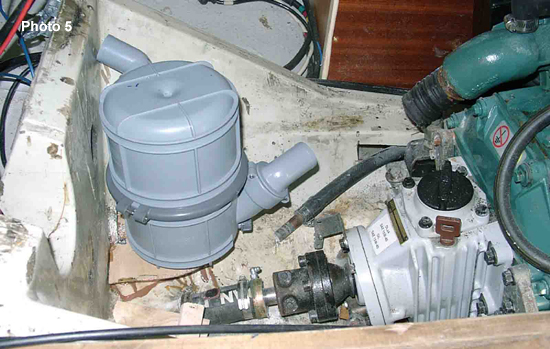 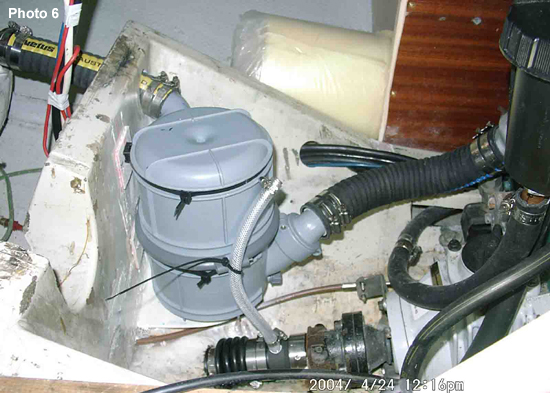 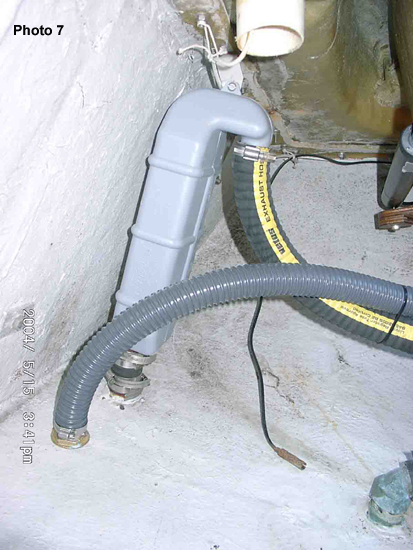